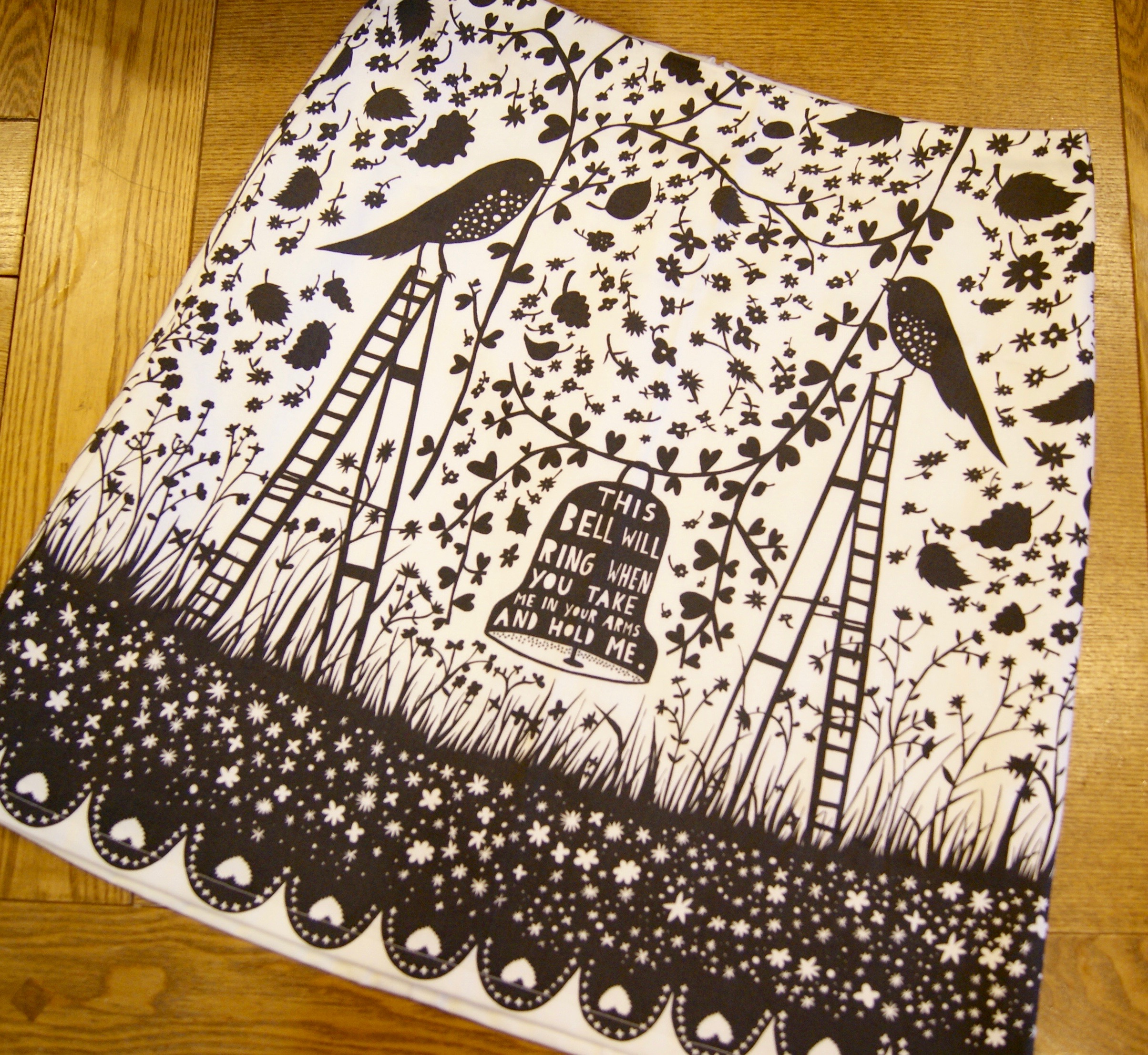 If you haven’t heard of Clothkits before (I had no idea of anything more than the name until about a year ago) here’s a bit of history – they’re a British company that’s been printing awesome sewing kits since 1968 that were hugely popular in the 1980’s. Their speciality is patterns that are printed directly on to fabric, so you don’t have to arse around with too much cutting out. After spotting them at a trade show last year we’ve been selling their paper patterns in the shop – the first patterns we’ve ever liked enough to stock! We’re fussy like that.

A few years ago Mattie acquired one of their fabric patterns, a Rob Ryan printed skirt. It has ever since been living around the back of Bunyip and it’s only now 3 years on that we’ve managed to commit the time to making it!

The first thing we did was trace over the pattern so that we could keep it for next time! Smart. I’m hoping to make a shorter one in our amazing peacock fabric, but considering this took 3 years to start I’m not getting my hopes up until around 2020.

Plus points: obviously I really enjoyed not having to mess about with patterns too much. You just join up the cutting lines to the size you want and voila – cut it out. The fabric the design is printed on was beautifully thick and printed in the UK which obviously fills our hearts with joy. There were also only a few pattern pieces, meaning the whole process didn’t feel too overwhelming and there was less chance of losing any of it.

The whole skirt from cutting to finishing only took us about 2 afternoon sessions in the shop which is pretty good going!

My only criticism of the kit was that some of the instructions were slightly confusing and I had moments of standing looking at the pattern for too long trying to piece together what they were trying to tell me. Considering that the pattern is meant for total beginner’s some of the processes are really brushed over and I think I would have struggled slightly if it had been the first garment I’d ever made. Also the photos they used to demonstrate said instructions were really hard to see! I know it’s hard to take photos of sewing lines but even so…

That being said, we actually stock almost the same pattern in our paper range, so we cracked it open to see if they’d updated it at all and – they have! Instead of photos there’s lovely illustrations, and they’ve changed almost all of the instructions that I had any complaints about. So even though you’ll have to cut the pattern out yourself you may find the process even more enjoyable!